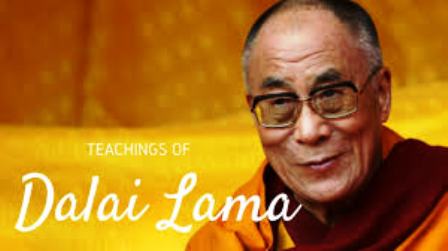 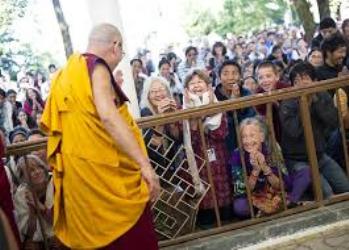 Educating the Heart and the Mind...Dalai Lama mentoring in Dharamsala Mainiguide ! 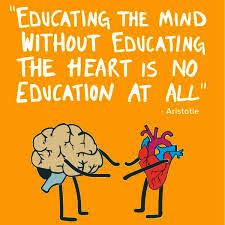 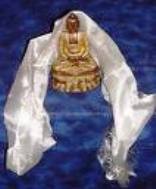 The offering of 'Katas' or white scarf is an auspicious Tibetan tradition for welcoming and the start of a good relationship. There are eight types of Katas. The three sizes of elaborate dzod tak, a silk Kata with Holy designs woven on it, the Mongolian Kata which bright blue, the plain silk 'ashi kata', the 'subshi'which is loosely woven cotton along with the 'sothar' and 'khachi'!

Till today it is used for blessing and welcoming guests.

It is also a form of saying 'goodbye' to the dead when it is tied around the neck of the corpse. This tradition started when a servant of a wealthy man tied his cow's woolen halter around the neck not knowing what else to do.!

It is important to understand the significance of these traditions when attending the Dalai Lama teachings. When it is tied around a deceased Lama it is ensuring he will be reincarnated quickly into this world! 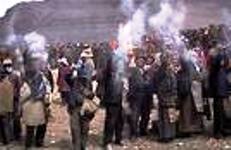 Throwing 'Tsampa' in the air..

Any auspicious Buddhist 'puja' and event..for Peace, Love and Compassion in Dharamsala or anywhere..is inaugurated by this tradition of throwing 'Tsampa' in the air!

This tradition started with the 'Bon' religion when the people of ancient Tibet observed animistic forms of religion and offered these fruit stuffs to appease their Gods. Throwing 'Tsampa in the air' is an expression of good wishes for your own and others happiness and for overcoming all obstacles! 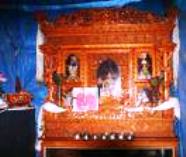 In every Tibetan home, there is a small Buddhist Alter to make offerings to the Three Jewels...The Buddha..The Dharma..and the Spiritual Buddha Mind ! These are represented in the Alter by a statue of a Buddha or a Thangka Painting, a Holy Buddhist Dharma text and the Stupa for an Enlightened Mind.

For more information on Body,Speech and Mind of Buddha go to.. Tibetan Buddhism when attending Dalai Lama Teachings !

This is a Hospitality tradition coming from Ancient India to honour a guest ! The first bowl contains clear water to drink for the newly arrived guest. The second bowl has water for guest to wash his feet as it was a custom to walk barefeet. The third bowl represents auspicious prosperity..an allusion of flowers for men and women. The fourth bowl is incense..a fragnance to purify the air and please the senses. The fifth bowl is a bright light in different colours to eliminate the darkness of Mind and the satanic forces. The sixth offering consists of bowl of scented water to suit the Mind and Heal the Heart. The seventh offering of the bowl is of mollases, honey and 'Tsampa' or a parched barley flour cake to please the Gods! The eight offering is of melodious sound which is not represented in a bowl but ...as sweet pure music of the Mind and Prayer! 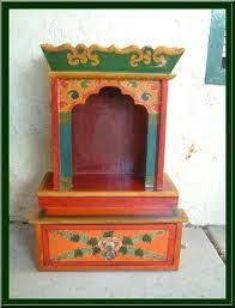 The Traditional Vajra and the Bell...

You will see the traditional 'Vajra' and hear the sound of the 'Bells' in any Buddhist Monastery or Tibetan home while attending Dalai Lama Teachings !

The 'Vajra' can either have nine, five or three spokes. In a peaceful Vajra the spokes meet at the top, while in a wrathful Vajra destroying the evil, the spokes are slightly splayed at the end. The upper spokes of a five spoked Vajra symbolize 'The Five Wisdoms !' * The mirror like purified Wisdom of an Enlightened Mind. * The Wisdom of Equality where indifference and unpleasantness to other Human beings are purified.

The base of a Tibetan Bell must be round, above which is a vase mounted by the face of a Goddess Parjnaparamita. Above these are a lotas, a moon disc and a Vajra at the top.

The hollow of a Bell symbolizes the Wisdom encircling Empiness and Ignorance. The clapper represents the sound of Emptiness, the Lotus Petal are the Mothers and Goddesses while the Vase represents the Sweet Nectar of Good Dharma and Karma. 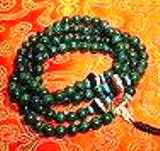 During the Dalai Lama Teachings you will observe many people with their personal 'Prayer beads' chanting mantras. This is mainly used to count the mantras which can be recited for four different purposes...To appease, To increase, To overcome or Tame by forceful means.

Beads can be made of Gold, Silver, Mother of Pearl, Sandlewood Fragnant beads and even of Raksha seeds for Tantric mantras. Beads made of Bodhi seeds or wood can be used for many purposes..for counting the Mantras, prostrations, circumambulations and prayers! 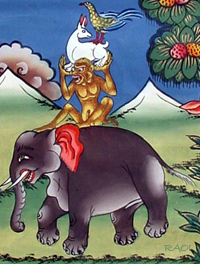 The Four Brothers of Harmony...

There is so much to learn from the Dalai Lama Teachings on..Love..Compassion..Peace..Personal Discipline and respect for all creatures of God and Environment !

Centuries ago in Kashi (Varanasi), in the deep forest there lived a Grouse, a Hare , a Monkey and an Elephant. They wanted to know who was the eldest among them, so they decided to ask each other how they remembered seeing a particular tree.

The Grouse said it had eaten some seed, that the tree had sprouted from his droppings. The Hare had drunk a few drops of it when it had but two leaves. The Monkey and the Elephant remembered seeing it the same size as themselves.

Thus as per their order of seniority they went about with the Monkey riding on the Elephant's back, the Hare on the Monkey's shoulder and the Grouse on top of the Hare. What is big in body is not necessarily the senior most in Wisdom!

A Realisation from the Dalai Lama Teachings that there is Wisdom in all creatures of God and Nature. These animals decided to enter the Path of Virtue these by observing the Five basic Moral deeds.. Avoiding killing, Not taking what is not given, Sexual misconduct, Lying and Abstaining from Alcohol. They taught these to all the other animals and brought about Peace and Prosperity in the Kingdom. The King and the Queen were told by a Hermit that the cause of their good fortune was because of these animals. they wanted to see these animals but the Hermit told it was not necessary..but they could achieve the same by following the same Teachings !

*** What you learn from the Dalai Lama Teachings in Dharamsala should bring the same Harmony in your Life by practising the same in your daily life !!***It is a chapter of growth for us.

The Dalai Lama Teachings in Dharamsala...

The Annual Spring teachings of His Holiness the Dalai Lama in Dharamsala also called 'Monlam Teachings' are held on the sixteenth day of the first month of the Tibetan Calendar...sometimes in February or March every year.

Several thousand people from all over the world attend them and they are translated into Chinese or Korean and English over the Public address channel on FM Channel.

During the winter months His Holiness along with the 17th Karmapa give the Dalai Lama teachings in Bodhgaya, Sarnath and other Buddhist shrines in India. His Holiness gives a number of Empowerments and Kalachakra Initiations also.

The Dalai Lama teachings and Public talks are also held in different places in the world at various times of the year.

All personal travel arrangements and lodging have to be done on individual basis. For initiating quick processing of registration for the Dalai Lama Teachings in Dharamsala along with any help required for Travel Arrangements..

Contact us for HHDL Schedule or the Dharamsala Head Office of the Dalai Lama. 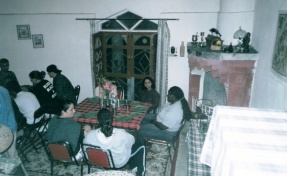 Today the Dalai Lama Teachings, Swami Chinmaya Teachings and the Four Energy Zones (Shakti Peeth) in Dharamsala have made it the "Spiritual Capital of the World". People come here for the rejuvenation of the Soul, Body, Mind and Spirit!

I asked once an American student why was he staying so long in Dharamsala ?? His prompt reply was simply this," The best lessons of Life can be learnt here which no University can teach.."

People come here all around the year from all walks of life enjoying the ancient Wisdom of the Himalayas !

" Thanks for your generous hospitality. I want to come back here again next year in your beautiful area. Enjoy your mountains, your beautiful state and the colorful people." - Joel Anderson MSU, USA.

" Thank you for the warm Himalayan hospitality which we truely appreciated. There is a world of Wisdom here in this beautiful town. The beauty of the land touches our souls and we would like to come here once for the Dalai Lama Teachings !" - Hana Wilson MSU, USA. 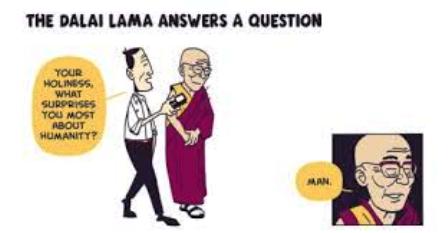 For more on Dalai Lama , Dharma Teachings, Meditation go to... 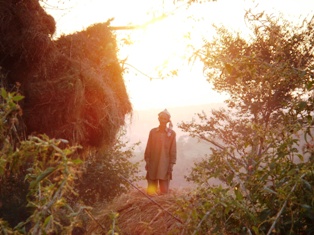 "Judge your success by what you had to give up in order to get it."

...His Holiness the Dalai Lama. 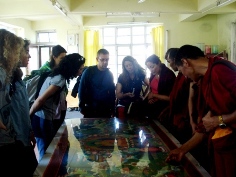 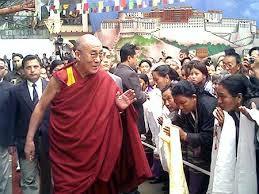 H.H The Dalai Lama Teachings are scheduled at Dharamsala from