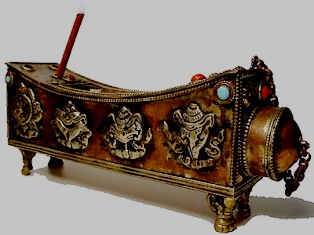 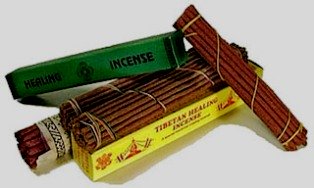 Incense has played an important role in many of the world's great religions. It came into existence 536 BC in the Tigris & Euphrates Valleys.

The ancient Egyptians used it for daily worship before the sun god 'Amon-Ra' and for the rites that accompanied burials. The smoke from the incense was thought to lift dead souls toward heaven. The Egyptians also made cosmetics and perfumes of incense mixed with oils or unguents and blended spices and herbs.

Both the ancient Greeks and Romans used incense to drive away demons and to gratify the gods. The early Greeks practiced many rites of sacrifice and eventually began substituting the burning of incense for live sacrifices. It was later imported to Europe by the conquerers like Alexander The Great in 323 BC.

By the fourth century A.D., the early Christians had incorporated incense burning into their practices.

The rite of swinging the censer was and is used in many religions; the censer (also called a thurible in the West and a k dan in Japan) is suspended on chains and carried by hand.

Incense was always employed more extensively in eastern religions. The Hindu, Buddhist, Taoist, and Shinto religions all burn incense in festivals, processions, and many daily rituals in which it is thought to honor ancestors. Incense burners, which are containers made of metal or pottery in which incense is burned directly or placed on hot coals, were first used in China as early as 2,000 B.C. and became an art form during China's Han dynasty (206 B.C.-220 A.D.).

In Japan, incense culture included special racks to hold kimonos so the smoke from burning incense could infiltrate the folds of these garments. Head rests were also steeped in incense fumes to indirectly perfume the hair. Clocks were made of incense sticks; different scents from the sticks told those tracking the time of the changing hours.

Tibet used these incense sticks during Bon Era and the start of Buddhism in the 8th century in the Monasteries. Special Alters and burners were intricately made for this purpose for the Vajra Tibetan Incense. 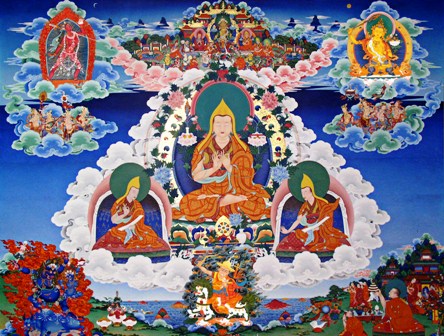 Incense comes from tree resins, as well as some flowers, seeds, roots, and barks that are aromatic. The ancient religions associated their gods with the natural environment, and fragrant plant materials were believed to drive away demons and encourage the gods to appear on earth; they also had the practical aspect of banishing disagreeable odors.

Western Incense is still used in churches today and comes almost exclusively from the gum resins in tree bark. The sticky gum on the family Christmas tree is just such a resin, and its wonderful scent evokes the holidays.

Eastern Incense is processed from other plants. Sandalwood, patchouli, agarwood, and vetiver are harvested and ground using a large mortar and pestle.

In India, this form is the 'agarbatti' or incense stick, which consists of the incense mix spread on a stick of bamboo.

The Tibetans in Dharamsala, prefer the process of extruding the vajra tibetan incense mix through a kind of sieve to form straight or curled strands, like small noodles, that can then be dried and burned. Extruded pieces left to dry as straight sticks of incense are called 'joss sticks.'

Incense paste, is also shaped into characters from the Tibetan alphabet or into maze-like shapes that are formed in moulds and burn in patterns.. believed to bring good fortune. For all incense, burning releases the essential oils locked in the dried resin, which purifies and heals the air around you. 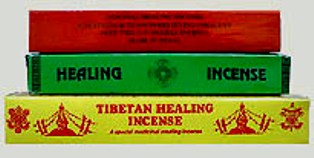 In the Himalayas the incense and 'dhoop' is handmade according to traditional Tibetan and Vedic recipes. All natural ingredients are used such as flowers, leaves, grass, wood, bark, spices, & aromatic herbs found in the high altitude regions of India ,Tibet & Nepal. This tibetan incense is rolled herbs, so is there no wooden stick and no chemicals used that could be harmful to inhale.

Many tibetan incenses are healthy for inhalation. These medicinal incense, are prepared as per vedic tantras. These incenses have many uses such as "to flavor ones surroundings with good fragnance".

It is healthy for relaxation and relief from stress, meditation and vedic puja. It is sometimes used for sanctifying the air. 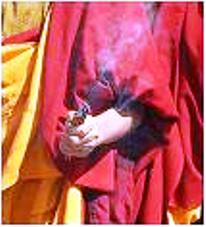 When you first arrive in Dharamsala..the fragnance of Pine in the air and healing incense will welcome you to this beautiful valley. It is part of the spiritual energy which will re-juvenate you.

Take a little bit of this himalayan essence back with you...You can shop for exotic..healing , prayer, jasmine , tantra and herbal incense sticks.

Intricately carved Tibetan Alters and Incense Holders can complete you Buddhist gesture of Compassion..a memory of a lifetime !! 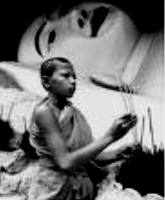 Ten virtues of incense: 01. Incense brings communication and the transcendent. 02. It purifies mind and body. 03. It removes uncleanliness. 04. It brings alertness. 05. It is a companion to solitude. 06. In the midst of activity, it brings a moment of peace. 07. When there is plenty, one never tires of it. 08. When there is little, still one is satisfied. 09. Age does not change its efficacy. 10. Used every day, it does no harm.